Celebrating the past and building for the future.

Posted on September 29, 2010 by amusingelephant

Hyderabad is at a crucial juncture in it’s cultural history. The city is in a constant battle with itself where it is trying to maintain itself as a culturally rich city known for it’s architecture, multilingual culture and fine cuisine. At the same time it is trying to portray itself as the center for information technology in the East.

HITEC City (Hyderabad Information Technology Engineering Consultancy City) is in stark contrast to the ancient monuments and landmarks of Hyderabad city. The structures are a tribute to technology and business, competing at a global level.

Char Minar (Mosque with four minarets) monument is a famous and historical mosque in Hyderabad. The surrounding area is also known as Char Minar. The architecture is a representation of Islamic architecture of the time and embodies some elements of temple architecture in the South. The climb up the narrow and steep stairs of the minarets can be fun but it was sad to see the betel stained walls. The views from the Char Minar are spectacular. The city is blanketed by modestly scaled buildings allowing for expansive views of the city.

The Char Minar is flanked by markets in all four directions. A popular market known as Laad(Lacquered) Bazaar or Choodi(Bangles) Bazaar sells bangles, imitation jewelry and saris as well. It began pouring while we were at one of the shops and so we spent some time chatting with the choodi sellers. It was fun to hear them speak in Hyderabadi Hindi. They recommended that we try Nimrah cafe close to the Char Minar for some Irani chai. When the rains paused for a bit my friend Jumeirah Jane and I made our way towards Nimrah cafe leaving behind the loitering lamb and the shy sheep to shop some more. On our way out of the market it started pouring again and we got drenched and surprisingly we did not mind it.

Laad Bazaar. Bargaining is part of the fun.

After an afternoon of walking around Char Minar and battling the rush hour traffic. We reached Shilparamam an arts and crafts village that showcases diverse work from across India. It is very strategically placed close to HITEC City, promoting Indian arts and crafts on a global platform. That evening there was a kuchipudi dance performance scheduled and we either missed it or it was cancelled. We walked around the village for a bit, heard a classical carnatic singer perform and then took a chai break.

The next day on a scorching Sunday afternoon we went up the kala pahad (black hill) to see the Birla Mandir. The climb is eventful as the path is lined up with shops selling offerings for the god and snacks. Shoes and electronics are to be left at the base of the temple. The temple is made of white marble and is nestled at the edge of the kala pahad. It offers panoramic views of the city and with the clear skies we could see the historic Golconda fort. 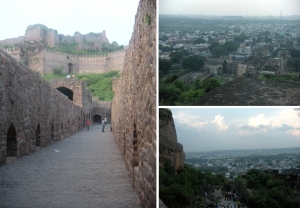 Our final stop was the historic Golconda fort. As we entered the walls of the fort we noticed that a city has been thriving within the walls of the fort catering to tourists specifically. We passed a talab (a pond) and my friend the loitering lamb joked that the queen of the time probably came down to take a bath here and our cab driver confirmed his story. The fort was busy with tourists and there was a constant stream of people going up and down the steps of the fort. The ancient ruins of the fort and the modern backdrop of the city are a juxtaposition; the fort walls are holding out the skyscrapers that are approaching steadily.

Jumeirah Jane, Loitering Lamb and the Shy Sheep. The less said the better.

Hyderabad is about the new existing with the old; a contradiction in Indian life and traditions. The city like most Indian cities is building up rapidly to meet demands and at the same time struggling to preserve it’s cultural past. It is very important that we celebrate our past and not just build for now but plan for the future.

3 Responses to Celebrating the past and building for the future.