Posted on September 10, 2010 by amusingelephant

Gallery BMB is a part of a new wave of galleries that have opened in Bombay to promote contemporary art. The gallery is located on the ground floor of Queens Mansion building in the fort area and it also has a modest bookshop and an adjoining cafe called The Banyan Tree cafe.

The bookshop has books on contemporary art, architecture, design and contemporary Indian art. The dynamic shelving system and angled surfaces of the bookstore animate the space. The gallery is designed by architect Nuru Karim, one of the founders of LIVE(Laboratory for Interactive Visionary Environments). The gallery itself is very flexible; consisting of a main space that can be separated into two if desired and there are two to three smaller rooms for more intimate art work or video installations. 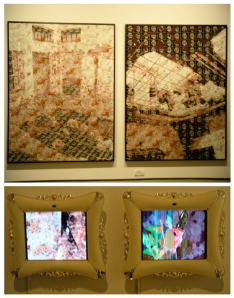 At present the gallery is showcasing the works of five artists that are a part of GALLERYSKE in Bangalore. Avinash Veeraraghavan’s three pieces; two prints and a two channel video are a collage of dreams. The dreams are layered with objects and imagery lacking clarity as dreams often are. The video installation is a repetitive three-minute video that loops images that are bright and dark; obsessed with sex, games, beauty and death.

Sakshi Gupta’s untitled sculpture of a donkey portrays the animal in a state of acceptance of his daily life’s trials and tribulations. The second piece also untitled is skeletal and dark; indicative of self-retrospection. 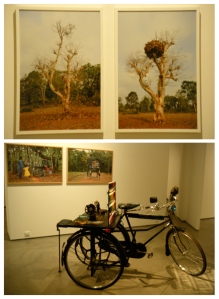 With a background in theater as a prop make and performer, Srinivasa Prasad’s work is dramatic and involved. The first piece titled ‘Nest,’ consists of two photographs narrates a story of the yearly seasonal cycles. His second piece is an installation and two photographs that documents his performance in rural Karnataka. The performance consisted of him attaching a sewing machine to the back of his cycle and riding through towns and villages and sewing up old clothes that people brought to him.

Zakir Hussain’s untitled work consists of three pieces that document the rhythmic movement of the army. His work probably had another layer of information and or meaning but I personally had a hard time reading. Lastly Navin Thomas’s video installation is a recording of a discarded found object, that sings.

The narrative in Veeraraghavan’s and Prasad’s work instantly engages the audience.  Gupta’s expressive three-dimensional work makes and emotional connect. Contemporary art can have endless interpretations and therefore I personally found Hussain’s work complex and alienating. Thomas’s video I presume was simply a documentation of a found object.